Moving aboard with God at the helm

24th May 20227th June 2022 workplacematters Christian, Coming along side, Volunteer 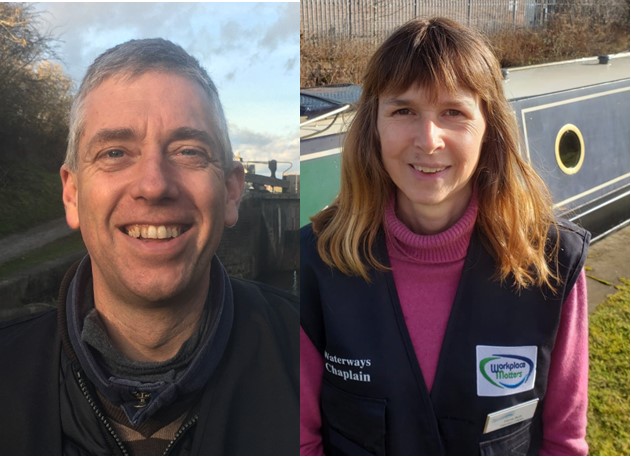 When probationary Chaplains Steve and Fiona Burt first encountered two Waterways Chaplains on the towpath last year and it was explained to them that the ministry is ‘pastorally active and spiritually reactive’ they thought that was an excellent ethos. Little did they realise that only a year later they would have bought a 58” narrowboat and be training to join the growing band of chaplains. Here are some of their experiences.

“Over the last 3 months we have found the phrases ‘live-aboard continuous-cruisers’ and ‘trainee chaplains’ have stimulated many interesting conversations. The first opens the doors to lots of helpful advice and support (we are generally the grateful recipients of this, including some minced beef from the local food hub and a mooring pin). The second opens the doors to lots of fascinating conversations, generally over a meal or a cup of coffee. These make me thankful that I have something even more precious to share in return; the Good News of Jesus Christ.

We have found that God has already been at work in the hearts of many of the people that we speak to, although they are rarely church attenders. Recently we have been on the Oxford Canal with two boats with, coincidentally, the same name. The first chap developed his own faith from the age of 7 and held some unorthodox views. I ‘helped’ him with a lock which ended up taking over 1hr as we discussed the reality of relationship with God outside of a church context and, as we parted, I suggested that if we meet again, I will invite him aboard ‘Lutra Lutra’ to hear more of his home-spun theology. The second boater described his pilgrimage on the Comino de Santiago as ‘life-changing’. Over a couple of bottles of wine that night he told us the whole amazing story and the next day I felt God tell me that whilst his Spanish pilgrimage had resulted in a reconciliation to other people, that his canal pilgrimage needs to be about reconciliation to God. I have a card and bible to give to him when we next meet.

The Waterways New Testaments have been well received by several boaters. I have also given my daily devotionals away to a boater who had once been active in the church but had not connected with any Christians since moving aboard 3 years earlier. She later texted us to thank us for ‘inviting her back to faith’. And we put a couple in touch with BCF, as they explained that they had left the church years earlier, but had ended up on a boat called ‘Amazing Grace’ and, having experienced healing, were ready to reconnect with God’s people again.

In addition to this, the move aboard has stimulated some interesting conversations with our ‘old’ neighbours and friends in Cardiff. They will all be receiving an invitation to our forthcoming commissioning service and a good number of them are not yet Christians!.“