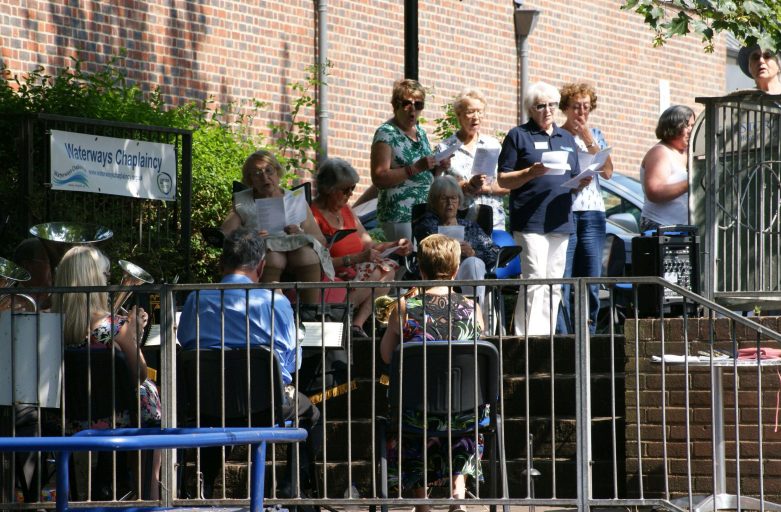 July. Sun blazing. Brass band playing. It must be Ware Festival time! Lorraine Newman again organised the outdoors towpath service at the Ware Festival which was temporarily moved to the shade in the car park because it was so hot. Around 30 people attended plus all those sitting listening in their boats having their Sunday morning coffee. Team mate,Revd Anthea Cannell spoke about,

These words form a frieze around the dome of the Mersey Docks and Harbour Board Head Office in Liverpool. (see below)

I told the story of my Great Uncle Jack’s life from the time he first went to sea under sail, through his long career as a Master Mariner serving as a Captain with several of the major shipping lines, his time during and after the Second World War when, although retired, he worked as a ‘shore captain’, until his final command. This was the commissioning and delivery of a Sail Training Ship, destined for service with the Navy of a South American country. By the time this craft had been built on Merseyside, Great Uncle Jack was the only surviving Master Mariner in Liverpool who had the experience of going to sea under sail, and the necessary skills to sail the ship across the South Atlantic. He was then in his seventies.

Great Uncle Jack was a wonderful storyteller. In our childhoods, he inspired first my father and then me with a longing to go to sea. Although he wasn’t a churchgoer, my Great Uncle was convinced that the words of Psalm 107 quoted above, were trustworthy and true. He believed that, in his long experience of life on the ocean wave, he had seen the power of God’s hand.

Although my father and I spent many joyful hours sailing our dinghy round the coast of the Isle of Man, neither of us had a career at sea. My father damaged one of his legs badly in a motorcycle accident when he was 16. And I was always seasick on the Manx Steam Packet  boats. I discovered that I could be seasick on a canal boat moored on the Stort Navigation Canal in Roydon in Essex. I became queasy during a Baptism visit to the canal boat, and realised my limitations as a seafarer!

If I had been a passenger in the fishing boat with the disciples, I would have been shouting at Jesus, ‘Don’t you care about us?’ How often, when we’re faced with a situation and we’re at our wits’ end, we assume that God is asleep and doesn’t care about us. We need to be aware that God is in the boat with us, and we must have faith in him.” 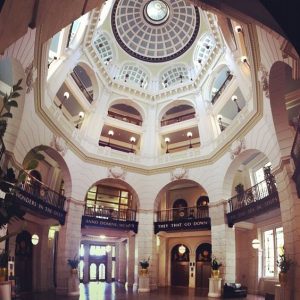