A new Chaplain hands out Bibles to Channel 4 crew 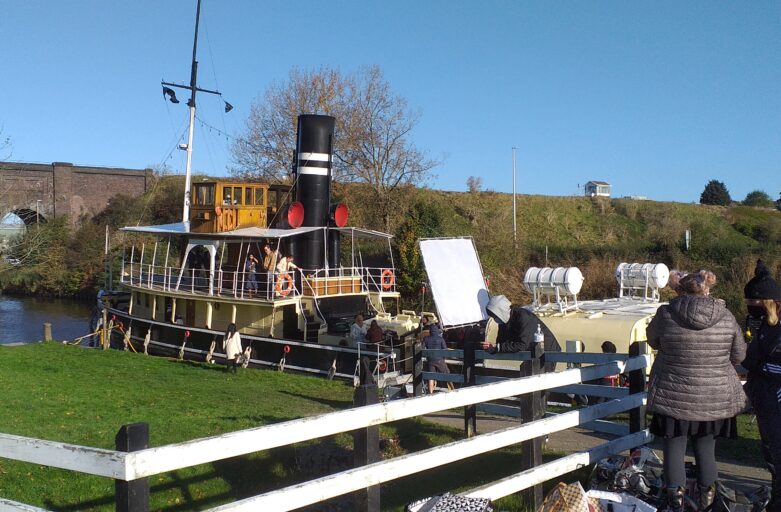 New probationary Waterways Chaplain Stuart Tabeart had received his gilet only a few days before as a Probationer for the North West Hub, and thought he would give it a try out on his travels. Stuart is centred in Winsford which means he has a host of marinas to visit, but chance took him to Sutton Weaver, which as its name suggests is on the River Weaver in Cheshire.

There is a swing bridge as the Weaver is navigable up to Winsford which used to be a busy commercial centre for the distribution of rock salt. At the Swing bridge there was an historic vessel, The Danny, an ex-Liverpool tugboat which has been converted into a leisure craft.

As a result of this, Stuart went over and adds “There were many vans and lots of people milling about, and I cheekily approached to see what was going on. I was introduced to a few people on a film set production for a Channel 4 series called “The Cure” to be screened next year. This was their final days shooting, using the ship as a set, and make-up artistes and camera crew from all round the area and London were gathered in the work”.

…He adds “As my faithful chihuahua Whisper was with me I had an instant intro to many people and talked freely about the WWC and its work. I was offered tea and lunch and had some significant conversations, resulting in my being able to hand out 3 new testaments to crew and 2 to the caterers.

I was absolutely made up and look forward to every opportunity the Spirit directs me to.”