Waterways Chaplains Sent to the Tower! 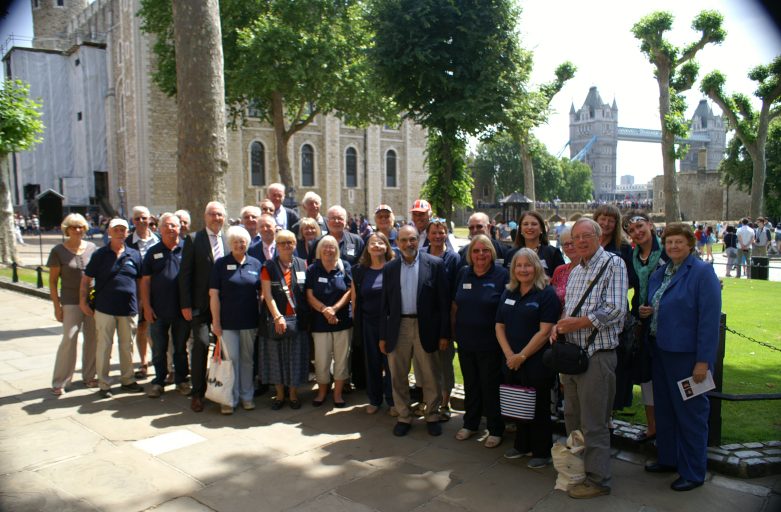 The profile of Chaplaincy to Britain’s waterways took a step up on Sunday June 24th when Chaplains from around the country met in the Tower of London for a 10th anniversary celebration service with a focus on this growing movement.

The Tower’s own Chapel Royal was built by Henry VIII in 1520 and is steeped in history. It has its own regular congregation into which the visiting Waterways Chaplains, most of them identified by their distinctive gilets, were welcomed by Tower Chaplain, Canon Roger Hall.

A dignified Church of England service with choir and vestments was possibly not the usual Sunday fare for most of the Chaplains present, but everyone felt welcomed with open arms in this colourful setting, the Tower grounds outside packed with tourists and visitors.

BBC ‘Songs of Praise‘  presenter, Pam Rhodes, delivered an engaging address highlighting how ‘Waterways Chaplains walk the towpaths because Christ walked the Earth.’  Her awareness of ministry to the waterways is informed by her experience of close family members being liveaboard boaters and she noted the necessity of practical neighbourliness and how assumptions can never be made about people’s personal circumstances. 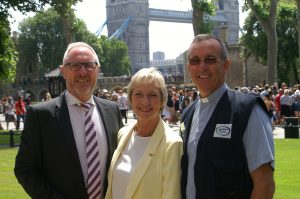 Pam stressed how some people gladly ‘run to the waterways’ because of the attractive life they appear to offer, while others may be running to them because of what they need to leave behind. She commented on the high numbers of single older men living aboard boats, many of whom risk isolation as health breaks down and age encroaches.

The day at the tower concluded for Chaplains with a cream tea and time to be together: ‘New recruits for London and the Thames were there,’ says Senior Chaplain, the Revd Mark Chester, ‘and this service was in part a celebration of 10 years since the first moves were made towards setting up what is now established very strongly. It was also an opportunity to highlight that our growing band of over 70 Waterways Chaplains has something unique to offer in terms of practical pastoral care for the two million or so people who live and work on and around our rivers and canals.’

A notable celebrity narrowboat owner who just happened to be sharing in worship agreed to join the Chaplains’ photograph afterwards. Actor David Suchet has owned four narrowboats and is about to embark on a search for number five:  ‘We wish him well with his quest,’ says Mark, ‘and, like so many others who cruise our 2000 miles of waterways, we know he will be glad that willing Chaplains are there to share both the joy of the waterways and the trials of those who may be struggling behind the colourful exteriors of their boats.’