That sinking feeling – How chaplains rescued a boater (and a cat!) in distress 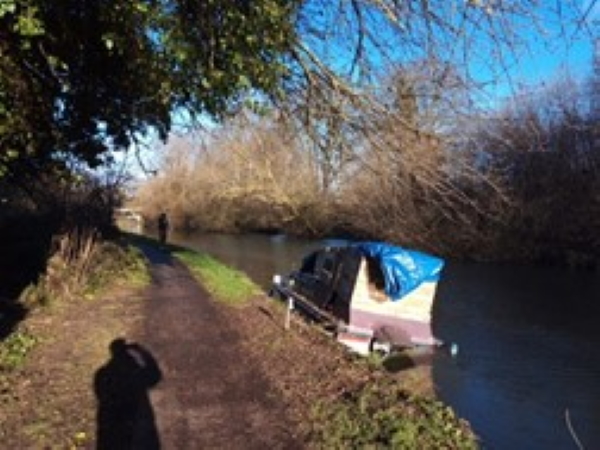 Earlier this year, We were given a name of a boater by the Canal authorities who were worried not only about the condition of a recent newcomer to living on the water but also about his boat.

We visited his boat which was clearly at risk of sinking. As well as the condition of the boat, it was the owners level of anxiety that really gave cause for concern as there were a number of relationship issues that concerned him.

We were able to give him a food parcel voucher as well as a Gideon New Testament and promised to bring him a meal in a few days.

When we arrived with the meal, we were dismayed to find that the boat had now sunk with the cat aboard, and with the boater nowhere to be seen! Luckily, a passing wide beam managed to moor alongside and prevent the boat slipping further into the main channel, enabling the brave chaplain to get aboard and rescue the cat.

The boater was contacted by phone and he tore along the towpath on his motorcycle, thus drawing the attention of two police officers who followed him. Eventually 10 people were involved in one way or another in the rescue!

Shortly after, an advert was put on Facebook about the cat and within 10 minutes a kind lady had responded who was used to saving strays. She is now keeping the cat until the owner is able to have her back.

The police rang all possible homeless centres for accommodation and eventually the local council were able to offer the boater a hotel room for the night.

It was truly amazing how God brought all of these people together to sort out the practical aspects, rescue the cat and find accommodation for the boater – who has now been put into temporary accommodation.